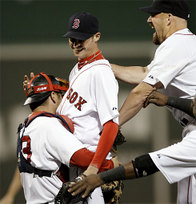 In the 2nd Major League Start of his career, Red Sox pitcher Clay Buchholz threw a no-hitter tonight against the Orioles!!!

This is exactly the catalyst that the Red Sox needed to take them into the post-season!

There was a specific event in 2004 that got the Red Sox firing on all 8 cylinders. It was July 24th when A-Rod got a beat down by Jason Varitek (the picture of Tek hitting A-Rod in the face was my desktop for a long after that) and then coming back and beating the Yankees in the 9th inning sent the Red Sox into a frenzy that didn’t stop until the World Series trophy was in hand!

Could this be the moment they needed in 2007? I think so!