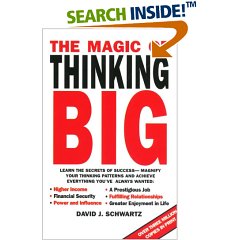 The Magic of Thinking Big was an interesting read. Part of it was very “The power of positive thinking-ish”, but other parts were very insightful into human behavior. I couldn’t help but think of people I know who are negative when I read the book. Mostly because the author describes these people to a “T”. I really believe if people were more positive and believed that God did want to work in their lives that He would. There’s a few too many Eeyore’s in the church there days and not enough Tiggers. (I’m not talking about being extroverted, just positive and happy to be alive)

Here’s a couple of quotes that stood out:

“Persons who reach the top rungs …get there by following conscientiously and continually a plan for self-development and growth.”

“Top level leaders in all walks of like spend much more time asking for advice than giving it.”

“Ideas are the fruit of your thinking, but they’ve got to be harnessed and put to work to be of value.”

“Salvage something from every setback”

“Nothing happens. No forward steps are taken until a goal is established.”

“Leaders use solitude to put the pieces of a problem together, to work out solutions, to plan, and in one phrase, to do their super-thinking.”